A Prolific Year: How Printmaker Sergio Suarez Took on 2020

In a year when galleries have closed their doors to the public and museums have delayed their schedules due to the pandemic, senior Printmaking student Sergio Suarez hasn’t missed a step. In fact, Suarez, at the age of 25, has had more solo shows in 2020 than most professional artists working in the field for decades. With an exhibition schedule so active, it’s hard to fathom how he balances rigorous courses, a part time job, a senior portfolio class, and time in his Southwest Atlanta studio space, which he shares with other Georgia State art alumni. But Suarez’s prodigious work ethic has always sustained his ambitious practice.

Most recently, Suarez participated in the senior showcase exhibition with the Ernest G. Welch School Gallery, where he included both sculpture and two-dimensional work. He also currently has work at Mason Fine Art Gallery, as a part of an extensive group exhibition of both established and emerging artists. Before that, his work was at Day & Night Projects in the Westside for his solo, “To be Accompanied by the Sound of Water” which incorporated heavy use of color in the form of chalk and pastel rubbings on Japanese mulberry paper. The work was called “both earth-grounded and cosmic.” 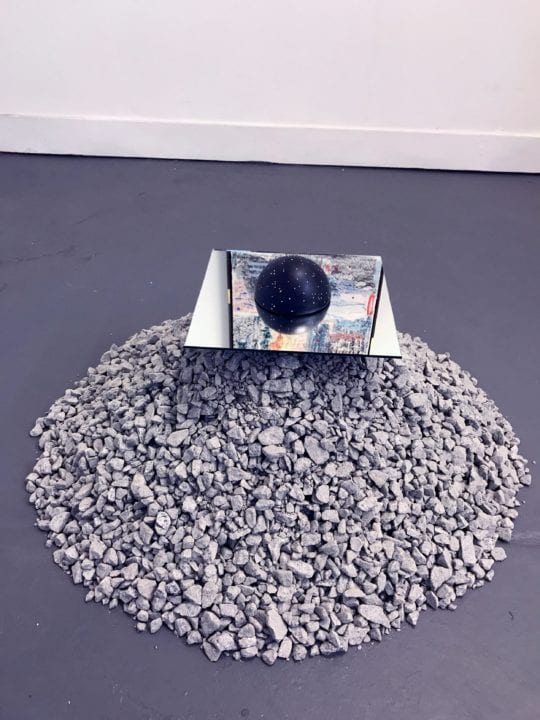 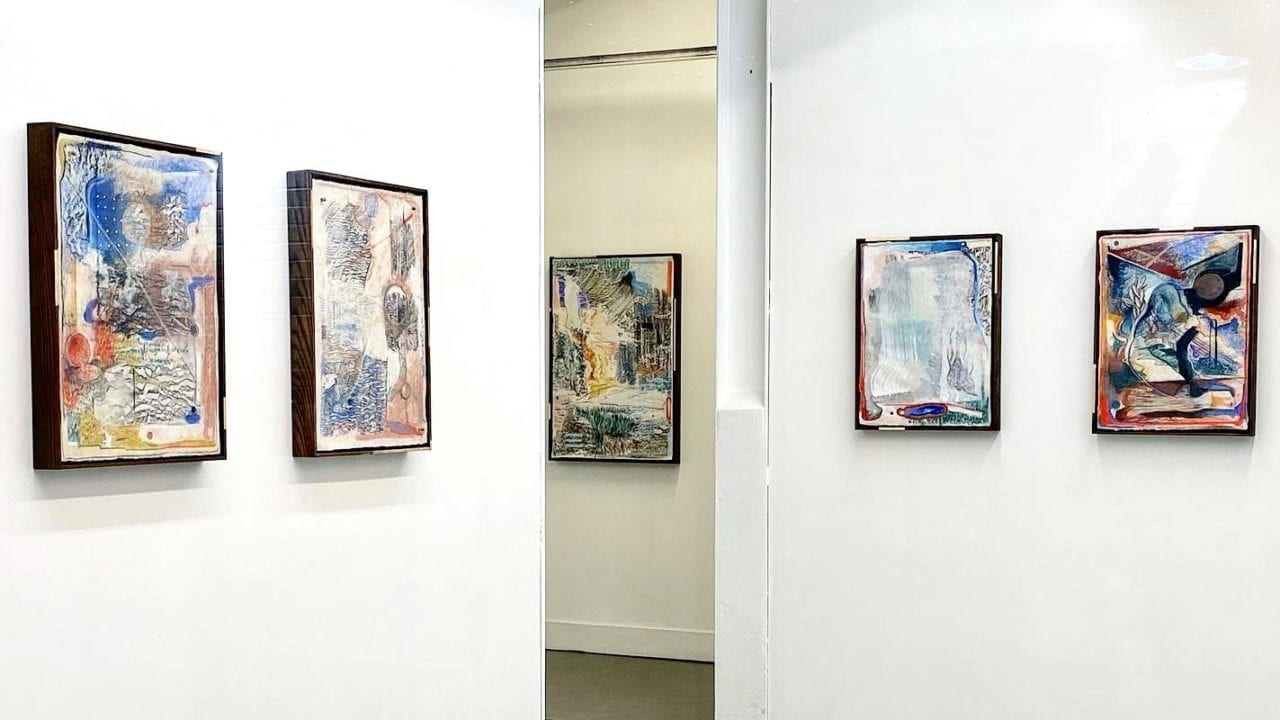 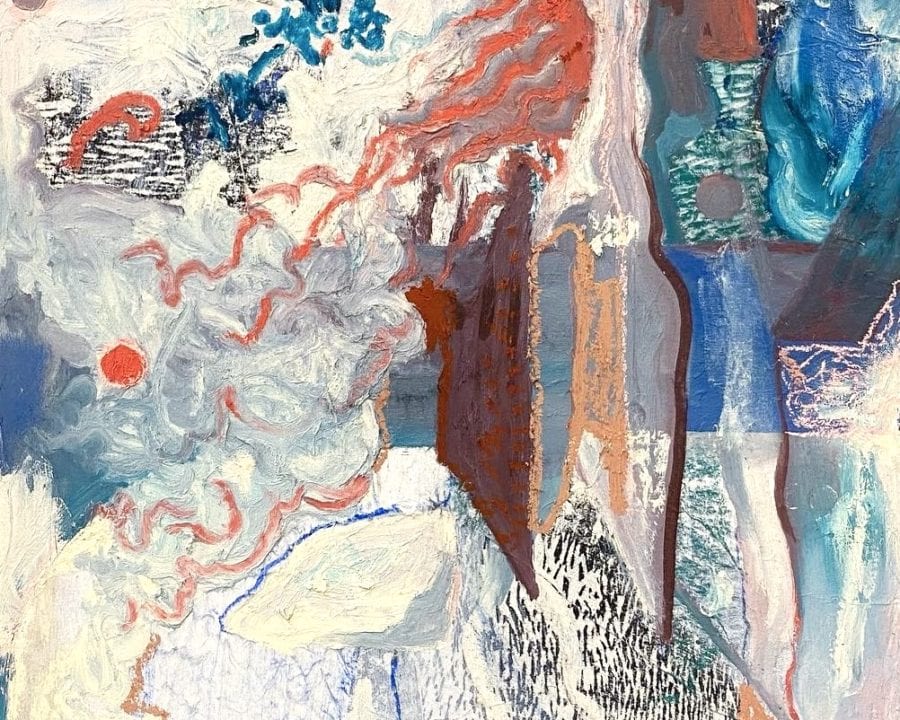 From August to September, he had a solo at THE END Project Space—an experimental, 200-square-foot gallery founded for emerging artists by Faculty Craig Drennen—which was preluded by a micro-group show, aptly titled "THE END IS NEAR," at Atlanta Contemporary during the beginning of the pandemic. He was also included in MOCA GA's group show, GA Artists of Hispanic Origin." The year kicked off with a solo exhibition at ShowerHaus Gallery—a gallery founded by two B.F.A. alumni at the Goat Farm Arts Center—which introduced sculptural carvings to his installation work.

His work had a number of international appearances. In keeping with art practice in the COVID era, he had an online exhibition “As a Revelation, Time Presents Itself,” hosted by PARED SPACE in his hometown of Mexico City. He had a print in the Woolwich Print Fair, for the Royal Arsenal, London, in November for which he received an acquisition award.  And he exhibited work in the show "Reflection: A Series of Arbitrary Observations," with OPED Space in Tokyo, Japan. 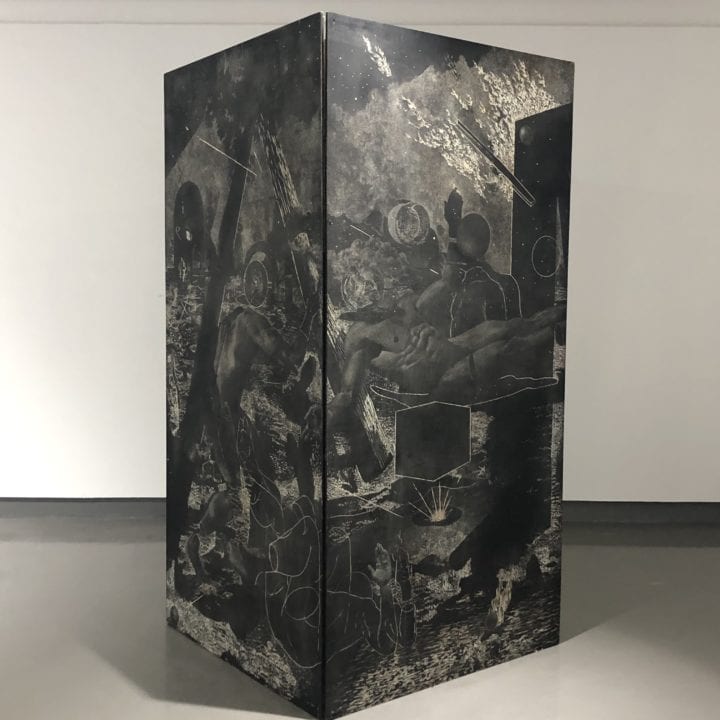 Suarez’s practice is a mix of printmaking, sculpture, and installation. This year, he introduced sound elements and experimented with color to accentuate the monochromatic scenes for which he is known. His woodcut scenes, sometimes carved or printed into a large, monoliths or untreated canvas, vibrate with texture. The imagery is reminiscent of mythological narratives, disjointed by the essence of surrealism that gives your body the sense that it has lost gravitational weight within a dream. The depth and detail within these scenes provide countless easter eggs of discovery and playfully disorient the viewer the way an M.C. Escher architectural drawing would. Classical figures mix with architectural features—features ripe with metaphor such as columns, archways, and cubes— and pose or hang suspended against a charged celestial sky.

The work’s content revolves around the Spanish word debrayar, which according to Saurez, "This word has no textual translation to English, but it closely approaches the “process where one loses the sense of time.” His goal within the work is to “translate debrayar to an aesthetic experience by using figure, landscape, and woodcarving as a medium to capture time.” He equates the reductive mark-making process for the work to “a material conversation with the past that explores narrative and the contradictory relation between experience and language.”

Visit our site in the Spring for an interview with Sergio Suarez and check out below for how to follow him online! 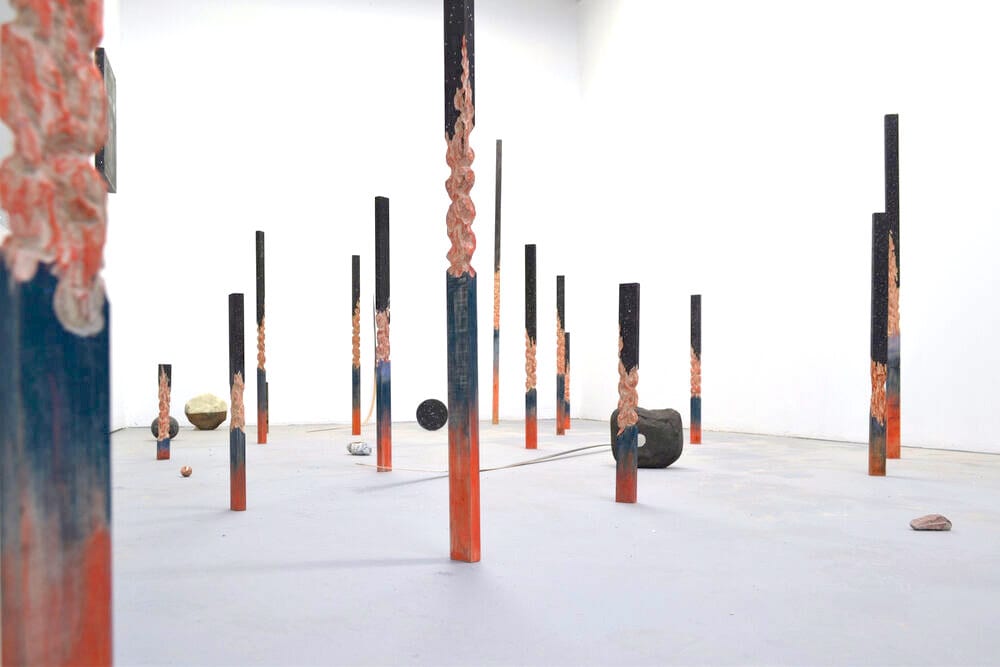 Bio: Sergio Suárez (B.1995) is a Mexican born, Atlanta based visual artist and printmaker. He uses the mediums of printmaking, painting and sculpture, to explore language and the structure of materiality in relation to narrative and contradiction.  He often borrows small parts of complex systems of thought and production in an attempt to create a space balanced between past and present. His work has been shown around Atlanta, in spaces like the Welch Gallery at GSU, the Abernathy Arts Center, Pulp Gallery, Noch 8 Gallery, the Consulate General of Mexico in Atlanta, and in Studio 9 of the Atlanta Contemporary. Internationally he’s shown at the Woolwich Contemporary Print Fair in London, the Haugesund Internasjonal Relief Festival in Norway, and the Ionian Arts Center in Greece; where he also was a resident in 2017 and 18.  His work is also included in the SGCI archives of the Zuckerman Museum. He lives and works in Atlanta GA where he is pursuing a BFA in Drawing, Painting and Printmaking in the Ernest G Welch School of Art and Design at Georgia State University.