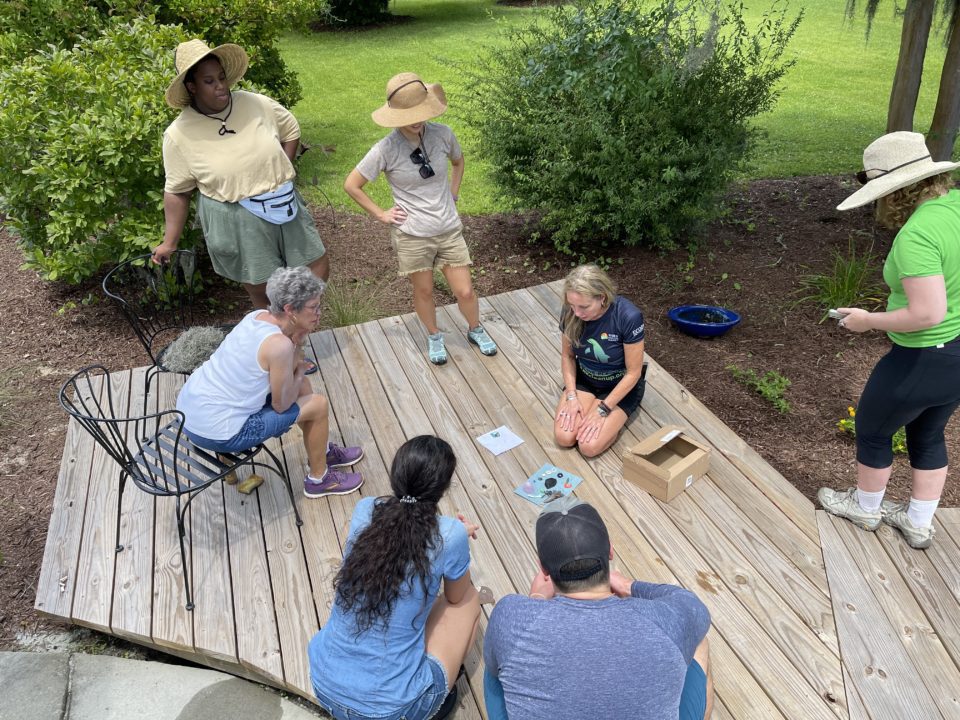 Collaborative processes are a pillar of collegiate education in the arts, but this July, students received the unique opportunity to travel to the coast for a weekend of inter-generational collaboration, on-site art-making, and environmental research with artist, alumna, and activist, Dory Ingram.

In 2003, Dory Ingram was wrapping up her Bachelor's of Fine Arts at Georgia State University. She had been working in dry and wet mediums, and studied under Drawing Painting faculty like Joseph Peragine and Pam Longobardi who undoubtedly influenced the appearance of natural phenomenons and environmental themes in her work. She has since moved to South Carolina and has been exhibiting her work about "nature and human nature, addressing such themes as life cycles, protective instincts, and man’s intrusion upon nature," extensively across the Southeast. Her art informs her activism and vice versa. She has become increasingly invested in the ecology of the area where she works directly with the local sea turtle rescue, volunteers with the Kiawah Island Turtle Patrol, and organizes beach trash pick-ups that involve inventorying and documenting litter into a progress data system.

This summer, Peragine, Longobardi and the Dean of the College of the Arts, Wade Weast, took a group of Welch students out to the South Carolina Lowcountry to learn from Dory and the coastal ecosystems there. The group consisted of four graduate students, Darya Fard, Lizzy Storm, Alyssa Hood, and Em Getsay, and one undergraduate, Danae Antoine who had all studied under Pam Longobardi as well. With expertise, connections, and recommendations from both Ingram and Longobardi, the students had a full week's itinerary.

The first day of the trip kicked off with a trip to the city of Charleston where the group collected discarded trash in the streets. Each day of the trip involved a litter "sweep." Whether the group was cleaning up the boardwalk, the riverfront, or the beach, they brought bags with them to leave the area cleaner than they found it. Through the process, they learned about Ingram's extensive cataloging to document her beach clean-up efforts. Longobardi's artistic and activism work also highlights the environmental dangers single-use plastics have on the environment, and more specifically our oceans; she encouraged students to look for symbolism and significance in the items they found. 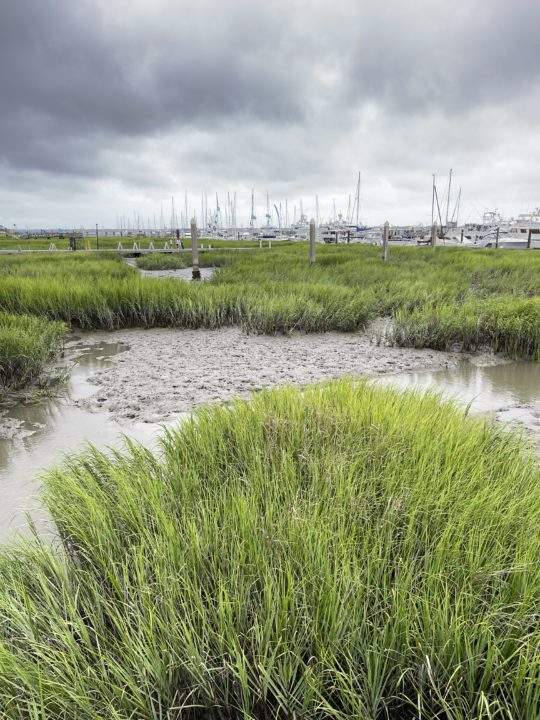 The next day's itinerary involved a trip to the South Carolina Aquarium, where students went with Dory Ingram to learn about the aquatic life impacted by the harms of pollution. There they also witnessed an animal rescue surgery and saw loggerhead sea turtles up close. Following the trip, they visited Ingram at her home and talked to her about her work.

The week's sweep work and educational sessions all led up to a collaborative project on the third day of the trip: using the direct sunlight of the beach, the group made cyanotypes on raw canvas. They used the discarded items and trash collected over the week and a collaged, object-based process made popular by photographer Man Ray in the early 20th century. At the end of the weekend, they quilted the cyanotype canvases together as a gift to Dory Ingram for the time she spent mentoring them.

When asked about how the week impacted them, Danae stated, "It was an incredibly enriching experience to be working with grad students, an alumna, and Georgia State faculty. I really got to know them in an amazing way and saw hands-on how to be an active artist in nature. I was really inspired by Pam to find inspiration in every little thing, and to stop and take notice of the things around you, and what your role is in this world in terms of art-making and art-activism. What also really touched me was seeing these alumni inspired to make art, and to continue their inherent curiosity that is nurtured in higher education." It was through these small-stepped projects that Danae received insight into Longobardi's perspective on environmental activism, "I really learned how to make a small change in the world. When I asked Pam about the current state of the world, and how someone as an individual can't make that much of a difference, and how she remains so positive, she responded (while holding a plastic straw wrapper), 'I know that at least this piece of plastic won't end up in a fishes stomach, and that's the attitude I have.' It was life-changing to hear."

"It was rewarding to work alongside other grads, Dory Ingram, and Pam Longobardi that had the same drive and mission," said photography M.F.A, Em Getsay," It was great to be a part of a project with a bigger purpose highlighted the kind of work I want to create after grad school. I was so inspired by the process and way art in collaboration manifests across different mediums. I can't wait for the next one!"
For photos from the trip, check out the College of the Arts slide show.